The 1964 NFL Championship ring of Jim Brown, widely considered the finest running back to ever play the game, was withdrawn from an online auction after the Hall of Famer claimed the ring was stolen from him more than four decades ago. 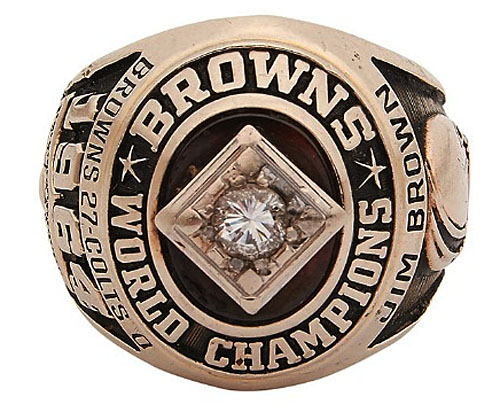 Despite setting numerous pro football records that may never be broken, the 78-year-old Brown won only one championship ring, and now that he knows where it is, he wants it back.

In a suit filed in a Manhattan federal court, Brown claims that sports memorabilia specialists Lelands, Bohemia, N.Y., refused to return the yellow gold and diamond ring that he reported stolen in the late 1960s.

In the publicity building up to the sale, Lelands called Brown’s ring “one of the most important sports pieces ever sold” and “without a doubt the finest football piece ever to reach the market.” As a sports ring, Lelands claimed, “it is rivaled only by Babe Ruth's 1927 New York Yankees World Series ring.”

Lelands, which had received bids as high as $30,275 before removing the ring from its online auction, had intended to sell it to the highest bidder by July 25.

The company claimed on its website that the ring had been obtained legally from a Brown family member and previously sold by Lelands in 1998. In that auction’s preview, Lelands noted that Brown himself inspected the ring and acknowledged its authenticity.

"That's a lie. I never spoke to anyone from there about the authenticity of the ring and I never would have given that ring to a family member," Brown told cleveland.com.

On its web site, the auction firm explained why the ring was taken down… “While we regret this controversy with Mr. Brown, who we personally admire as a great athlete, his claims are entirely without merit and we intend to vigorously defend against them. The provenance and chain of title for the ring are indisputable. After a successful resolution of this matter, we will sell the ring at one of our future auctions.”

During the auction, Lelands.com had outlined the ring’s history and ownership. “The provenance and chain of title is well documented: Jim Brown to family member to Lelands to Cleveland Sport Collection auction buyer back to Lelands.com and now to you.”

In the 1964 NFL title game, which pitted the game’s best runner—Brown—against the game's best quarterback—Johnny Unitas—the Cleveland Browns blanked the Baltimore Colts 27-0. It was the last time a Cleveland sport franchise—in any sport—won a championship. Brown averaged 5.2 yards per carry and ran for 12,312 yards during his nine seasons.